City dwellers desire to have time off for rest and relaxation, a moment of escape from everyday life. This is different to the past. Nature has been replicated so that it can be closer to humans. The concept of Chinese gardens is to replicate the universe in the form of a garden in order to create joy and pleasantness. The large stones are clouds in the middle of the garden, as if they represent the paradise of that model garden.

Khao mo (“mo” comes from “t’mo” with roots in the Cambodian language) is a type of Thai art that originated in the Ayutthaya period. The concept behind khao mo is the replication of nature to make it closer to humans, and the belief in the relationship between the height of Sumeru, which is a physical aspect, and the desire to be free of suffering, or the state of contentment, which is an abstraction. The ideas merged and were demonstrated through “khao mo”, which is a symbol of paradise. It is used for enjoyment as well as for ceremonies, especially the royal tonsure shaving ceremony. Those who enter the ceremony, the location of which includes the model of Mount Kailash for bathing within the Grand Palace, must be princes or princesses of the Chao Fa class only.

The new “khao mo” is presented within the original physical framework, but the meaning has been reduced to the beliefs about “khao mo” that have altered as times have changed. Audiences are given time to interact with the work. They have the opportunity to explore and find the hidden treasures on the inside via experiences from symbolic objects. They can journey from the past to the present, from the exalted down to the public. The inside of “khao mo”, which is a sanctuary, actually transpires as emptiness. It is the starting point of not-having and having, which is essentially the root of all things.

The smell of earth, the moisture and vapour that evaporate from the earth, the ordinariness and the emptiness allow the audience time to imagine further. When there is no clarity between right and wrong in the present, the mountain of virtue has a different belief or meaning. Once upon a time, right and wrong had only one truth. What was once black and white is now grey. The world of today has advanced technologically and the changing society has led to more individuality, as well as more self-confidence. But what is the source of that confidence? Where are morality and ethics? What channels does self-confidence have to guide it?

This mountain of belief is like the construction of khao mo for the people (Mythical Escapism). The space is designated for the time of the individual. The opening of the space is dedicated to the reflection of one’s personal thoughts and identity via this space of imagination.

All images are in courtesy of Sanitas Studio 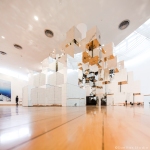 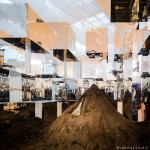